That depends on what you expect. Ask any woman about bra shopping, and she’ll likely possess at least one tale of improbable fit, pokey underwires, itchy lace, and ill-fitting cups, not to mention a few harsh words for the designers. But, before we plunge too deeply into that rabbit hole, you’ll need some background.

Before the 2016 American presidential election, which catapulted the real world headlong into an alternate-reality caricature of itself, Stick Chick had a gripe about American trade with China and was pleased to hear candidates talk about renegotiating deals.

Could we talk about quality control of important products?

For humanitarian reasons, Stick Chick makes a practice of avoiding purchase of products made or assembled in China despite their lower price tags. This remains a great challenge because of the temptation to shop on the cheap.

Similarly, she avoids shopping at Wal-Mart [which she calls Wally World; see Vacation the movie] in protest of its policies which help to keep its low-wage workers poor and its endless supply of Chinese-made products. But, despite her best efforts, her options are often narrowed or wholly unavailable.

She noticed this challenge when she shopped for a fabric shower curtain. Stick Chick scoured online and in department stores until, after three months of searching, she had to admit defeat. She could not find a single shower curtain anywhere that was not made in China. In a fit of defiant indignation, she opted to keep the old one until it falls off its rings.

Her reasons for avoiding purchases of Chinese made items are admittedly not entirely altruistic; Stick Chick also takes issue with the lack of quality control.

The low price should have been a tip-off, but the reviews (which in retrospect had to be faked) glowed. No mention of the bras’ country of origin appeared. The photos that showed off the delicate feminine features and the variety of colors made them attractive. Reviews supported the idea that products were true to size.

After checking the size chart and reviews, Stick Chick ordered her “usual” size in two colors: pink and light blue.

Puzzling to the point of comical, the supposed pink one could be better described as “soft peach” (which was not even an option.) But it was not so unattractive as to dissuade her from keeping it. Likewise, the light blue could better be described as “smoky seafoam green.” Again, not what she expected but pretty too.

The surprise she discovered, about which there was no mention in the product description, was the extenders included in the package with each bra. Bonus.

Had the extenders matched the bras, it might have been more so. The soft peach bra included a neon pink extender. The smoky seafoam green had an added electric medium-blue one.

Stick Chick imagined the factory offloaded overstock extenders to gain favor for sending freebies. That, or they’d unknowingly hired either a colorblind employee or one with zero fashion sense.

Stick Chick tried the bras on for size and determining they fit fine without using extensions, laundered them. The rub came after the first wash. Both bras shrunk so much that they no longer fit. Not even close. No way, no how.

Realizing the true purpose of the included extenders, she thought they should have come with this notice:

“We know they don’t match, but hold on to them. You’re gonna need them.”

Judge the lack of QC for yourself and make a mental note of this the next time your government wants to arrange a trade deal with China for something slightly more important like, say, I don’t know, scaffolding or airplane parts.

Can we just make sure it includes a clause about quality control?

It’s the season once again when Loverboy finds himself incensed and dismayed, the result of the neighboring property owner’s choice to rely upon a questionable landscaping company hired to maintain the adjacent greenery.

As you may recall, Stick Chick has observed that Loverboy has a thing (read: “twisted thing”) about the lawn. The day after so much as a drop of rain falls, a neurosis compels him to get out there and mow the grass before it becomes uncontrollable (read: “visible.”) But, that’s okay. Most years nature strikes a balance between days of rain and sun, so their lawn tends toward the enviable.

In seasons past, at 7:00 AM each Monday morning, the lawn maintenance team (whom we’ll hereinafter refer to as ACME Contracting) would show up with their staff of three, a zero turn mower and two weed whackers to commence blasting across the 1,600 SF of macadam parking lot/dumpster station, shaded picnic nook (read: “place where kids hide from their parents to smoke”), dog business spot and lawn. Apparently on a strict schedule, if they missed the usual Monday, well, bummer (read: “foiled again.”)

During the winter, to his credit, the neighbor erected stylized apartments to replace the former historic (read: leaning, crumbing and long-neglected) buildings that once claimed the space. These featured early 1900s era outbuildings including a commercial storage barn, sheds and a farmhouse that had, probably in the 1950s, been converted into apartments and rented garages. Until their demolition, no visible updates appeared save for a celebratory piece of oriented strand board nailed haphazardly covering a hole in the sagging roof (read: or to protect against probable Y2K fallout) —she was never sure which.

The new construction included hand placed sod lawn surrounding the buildings and parking lot, and a modest attempt at shrubbery and mulch along the street facing façade. Sadly, it appeared that lawn maintenance for the summer season would be postponed likely a result of pinching of construction pennies in the final days. But the balance of scorching sunny days and trickles of rain interspersed one another with just enough nourishment to keep the dying sod alive. 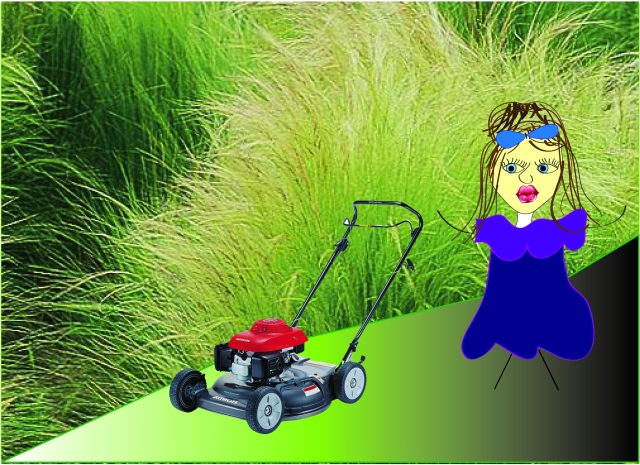 This year when spring arrived, Loverboy and Stick Chick (lacking the talent of a drummer playing Wipeout) waited with hopeful anticipation for the neighboring lawn maintenance team to arrive. Despite evidence to the contrary, Stick Chick said, “I’m sure they’ll do a better job this year,” when Loverboy gruxed about the inconsiderate and shoddy nature of the neighbor’s attempt at upkeep.

This Monday morning, on schedule at 7:00 AM in the pouring rain, Stick Chick stifled both a laugh and gasp of amazement to see that the Brainiacs had indeed sent a replacement “crew” of one with an aging push mower that sent clumps of sod flying through blades set a full two inches higher than Loverboy’s preferred blade height setting. Stick Chick recommends that the new landscape company (read: “sod butcher”) consider a name that seems par for the course: Take It Off my Rent Thanks.

Good help is hard to find.

While driving around town this week, Stick Chick passed a Smart Car as it headed in the opposite direction.

It attracted her attention size-wise so she naturally glanced into it as it passed. Much to her surprise, the passenger held a small child in his lap. Truly, there is no place in a car that size in which to put a child unless you attach the child to the outside as a hood ornament (but that may be going a bit too far.)

Stick Chick racked her brain to recall the last time she saw a child riding in a car on someone’s lap. It had been quite a while.

She grew up when seatbelts were mere suggestions of safety…ah the 60s.

In the neighborhoods where she lived, many families had five or six children and one family car, so there weren’t necessarily enough belts for everyone anyway.  If the parents had enough patience, all of the kids might have gotten buckled before exasperation and infighting took over.

Families that were lucky enough to own a woody station wagon would relegate the kids to “the very back,” unless it was full of groceries. There the rear window could be rolled down for much-needed air flow and the very back was considered safest (being farthest from the front windshield through which one could be launched in the event of a car accident.)

Cross-body shoulder belts had just begun to come into existence. Most seatbelts were thick and sturdy, and could adjust just enough to strap fully across two laps, clasped together with a sizeable metal buckle.

In summer, “buckling up” actually required scootching one’s shorts just right in order to avoid buckle burns and charred flesh.  The kid’s car seat had not even come into use (unless you count a wicker laundry basket lined with pillows.)

Stick Chick admits that travelling untethered, while risky, had its freedom.

Unlike the paths she has traveled, the widening one before her becomes smooth beneath her feet. The ivy thins, choked by an invisible entity that exposes the stone walls. While she remains cautious, her pace quickens. Her leg continues to ache as she picks up speed. The sound of her breathing swells nearly drowning the footfalls on the dirt beneath her feet.

She hears a humming. Glancing back over her left shoulder a drone approaches, a glowing red display shows a countdown. A robotic voice echoes, sound bouncing off the uneven face of the rocky walls: “Three minutes until detonation.”

A whirring and a breeze overtake her and the drone like a flash of lighting against a dark sky disappears as a blinding sun obscures her forward view. Brighter and brighter into the light she runs, agonizing over each step but terrified to stop.

Without warning, the ground beneath her vaporizes. She hears a disembodied, deafening scream and realizes it is her own. But like a voice encapsulated inside a steel vault, no audible noise emits into the atmosphere.

She falls, appendages flailing at first until she resigns herself to imminent death, and surrenders to the air that forces bits of hair away from her face. She stretches out her arms, abandoning any attempt to stop the inevitable until, unexpectedly, she slows. Time seems to stop. 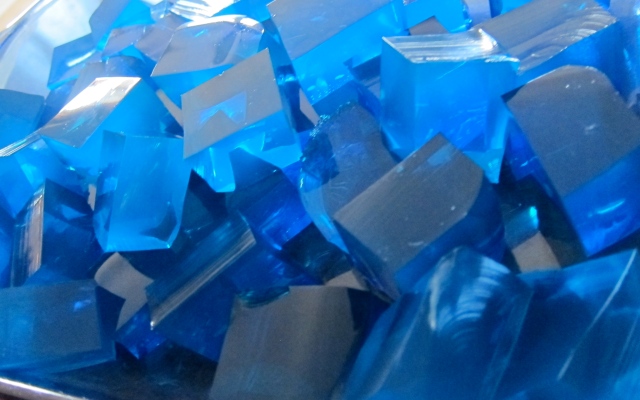 In slow-motion she passes into an unfamiliar gelatinous realm, neither air nor water. She can barely breathe, the cold blueness in her lungs.