Friday night I watched the streaming broadcast starring Patti Smith and Lenny Kaye along with their band mate Tony Shanahan as they performed and reminisced about their half century of song making and writing.

Watching this half century performance sans live audience brought to me feelings of both joy and melancholy.

In the quiet evening of my small home office, I teared up hearing her sing one of my personal favorites, a song entitled Ghost Dance popularized on the album Easter. But a clear highlight of the evening was her performance of Birdland from the Horses album. That one demonstrated the pure power of her lyrical poetry accompanied by Lenny’s guitar through diminuendo and crescendo blending its story; a sight I imagine paralleled the St. Marks Church show where Patti and Lenny performed poetry together for the first time in ’71.

During Friday’s streaming show it seemed that in Patti’s mind at least she was performing before a live audience. While the show was broadcast live and we, her audience watched from our devices, we weren’t there to scream, clap, shout, dance and give her the electric energy feedback on which live performers feed. And after saying “thank you” at the end of the first couple of numbers as any performer might do upon the crowd’s applause, she even commented on it. Aside from mentioning at the outset their proven good health and removal of masks for the show, this other moment acknowledged the strangeness of a pandemic performance.

Other show standouts included the Ballad of a Bad Boy, her tribute to Sam Shepard (who she described as a good man but also a bad boy) and Lenny’s World Book Night an unexpected but welcome diversion.

I’ve been a Patti Smith fan since ’78 when with a $6 dollar ticket in hand, I drove my uncool-body-style ’74 stick shift Mustang to see her band perform at the Science Center on the campus of Montgomery County Community College with my best girlfriend. There I’d fallen in love with punk, kept the souvenir buttons she’d tossed to the fans at the end the show and dreamed of a life for me as a rebel poet, a writer.

I followed her career, read her books and in 2019 snagged a 2×3 foot foam board poster advertising Year of the Monkey. The latest, Patti Smith on Patti Smith edited by Aidan Levy sits atop my current stack of new books to read.

Before we go there, it’s worth illustrating how dramatically things have changed in the nearly four decades since. Though there are companies which still produce class rings, it’s safe to say they’ve become passé. For a variety of reasons, students no longer clamor for those expensive mementos.

Stick Chick’s high school…true story…offered two other options in addition to the class rings that she coveted but could ill afford. One of these included the annual high school yearbook. It was the other that offered a more affordable and dare-she-say practical option.

Seniors could choose to purchase a cream-colored, 16-ounce ceramic beer mug with the high school’s official green emblem trimmed in genuine 14-karat gold. For an added fee, he or she could have an inscription (presumably a name) etched on the mug in gold.

Perhaps it was the heat of June in the 50s era buildings which lacked air conditioning or that her particular class could collectively be characterized as miscreants, but Stick Chick never understood how the student government managed to slide beer mugs for teenagers past the faculty advisors and administration. She recalls with great delight that a classmate named Bridget ordered hers which read, “Bird Shit” and got away with it.

Stick Chick purchased a mug devoid of customization, filled it once at the senior graduation party, quickly realized its potential and has kept it as a home for spare pennies ever since.

Ah, but we’ve digressed from the tale of the yearbook quote.

Feeling trapped as caged animals, Stick Chick and a friend fantasized about the places they’d travel and the things they’d do when they were finally free from the confines of high school and the small town in which they lived.

For fun, the two often challenged each other, attempting to out-create one another with fictional, fantastical scenarios whereby they would once escape. They wrote notes and kept journals of their plans, some sad, others brave and still others so silly to them that they’d find themselves doubled over with laughter in fit of tears, wheezing and gasping for air.

So it was obvious, after one particular fit of giggles that they’d plan to “dye their hair pink, move to California and join a hippie commune.”

The creation made for one of those inside jokes that only friends understand. When graduation approached and the papers for senior yearbook quotes were distributed, it seemed obvious to Stick Chick what she would write when she read the lead:

Every now and again, chance meetings with high school acquaintances begin with the comment, “Oh, I thought you moved to California. I must have been mistaken.”

To which Stick Chick would reply, “I wonder where you got that idea!”

Like Polaroid snapshots dropped one by one on a table, new memories replace the former. The static, scratchy broadcast of a cheap FM radio which sits high on a shelf behind the ice cream counter adds to the evening din; made worse by the surrounding mountain peaks that bounce the signal. The weak antenna draws intermittent snips, broken pieces of Bennie and the Jets and Love me Like a Rock, but even then, only if the weather is clear and still.

The slam of a screen door and footfalls on the wooden floor in the stagnant summer air evoke visions of a Tea Room where no one drinks tea. A single oscillating fan aided by two ineffective paddle fans force air movement. Vacationers gather to eat sundaes, play checkers or assemble puzzles together.

The adults tap bragging rights, sharing the year’s accomplishments of their children. “Bradley got straight A’s again this year. He won the spelling bee, he’s captain of the championship baseball team, still sings in the choir at church, and since he’s going into sixth grade this year, he’s a shoo-in for the lead in the winter play.  How’s Gregory doing?”

In hushed tones they share gossip. “Did you hear about how that Nick got Susan Wilson—preg.”

“Shush. His mother is coming in just now.”

Occasional titters punctuated with sudden blasts of uncontrolled laughter suggest shared off-color jokes. “Maybe you kids ought to go play shuffleboard for a while.”

The children finish their sundaes and rush outside to the shed beside the courts to turn on the lights and reach through cobwebs for poles and discs, vying for red sticking the opponent with dull black. The buzzing white lights draw swarms of gnats that dip and sway occasionally bombarding eyes of the competitors.

Later, gentle commands float on the humidity from the edges of the yard beside the Tea Room. “Fifteen more minutes. Last game! Remember to put the poles and discs back in the shed.”

Then, “Turn off the lights now. Grab your flashlights. Let’s go.”

Together they plod along the path that leads into the mountain dark back to the cabin.

Celebration of the U.S. Bicentennial on July 4, 1976 included: parades, fireworks, flags, hats, money and all manner of cheesy collectibles.

It was a time of extra pride that we (meaning a rag-tag bunch of farmers to whom many of us are not related, but with whom we stand proudly) had beaten the British. Those orderly-fight-by-the-rules types did not even live in America but nonetheless showed up in their fancy, schmancy uniforms to collect because they had the audacity to think we owed them tax money for the tea. 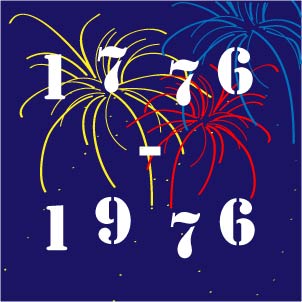 I suspect that today, any American household with an adult old enough to have celebrated the bicentennial, has some memorabilia lurking under the dust.

If I search hard enough in my house, I can probably find a bicentennial commemorative quarter.  This particular   commemoration for investment’s sake would have made sense except that they minted a billion of the copper-nickel ones and 45 million in “part-silver” for collectors.  Better yet, the government proceeded to sell them for ten more years.

Aside from its Colonial drummer design, the bicentennial quarter is the same as any other American quarter in both physical size and spending power.  The common understanding was that if we saved them, “They’ll be worth something someday.”

My friends and I in our teens at the time, were perhaps the most unlikely group to be avid coin collectors; neither were we informed that “someday” would not likely be in our lifetime.

Today, bicentennial quarters are worth…wait for it…

about twenty-five cents (unless you have an uncirculated one in mint condition, then it might fetch $5 or so on eBay®.) So I asked around to see who might have a stash of them squirreled away.  Result: nada. Even if you had a stash, you’d need someone willing to buy.

Another relic from 1976 that made as little sense then as it does now, is the two dollar bill.  Forget that there was no justifiable need for it, but it appears that no one gave any consideration to the idea that if people began to actually use two dollar bills to pay for everyday commodities, they’d unwittingly bollix a cashier’s job.  And heaven help the dyslexics among us.  That two looks a lot like a five.

Cash registers are designed with a money organizer insert containing ten slots in two rows; five long sections to the rear for bills and five short to the front for coins.

At first glance it would seem that the $2 bills would have fit quite nicely.   Not so.

Normally, the $20 bills belong second to the left.  From there are gradually decreasing increments from left to right: $10, $5 and finally one dollar bills.  The reserved space to the far left, or the fifth slot as it were, held personal checks and any bills larger than $20.

Credit card slips and coupons easily slipped in the drawer under the insert until the day’s close of business when counting the day’s receipts.  Not much has changed, except that today, few people pay with cash and fewer with a check.

No big deal you say?  Try this…

The next time you shop and the amount you owe is $5, hand your cashier a roll of pennies, three half-dollar coins, a Susan B. Anthony dollar, and a two dollar bill.  Just be prepared to duck when the roll of pennies comes hurling at your temple.

Two hundred years of not paying taxes for our afternoon tea casually replaced by the coffee-consuming-to-satisfy-the-shareholders that we are today is an interesting trade-off.  Don’t you think?