Today Stick Chick received a gift. Though it is critical to note, it was from the heart. Still – well, you’ll see. 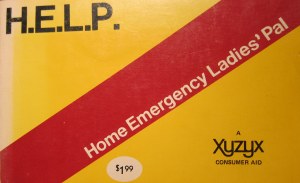 The little paperback marketed to the modern 70’s woman has detailed instructions on topics like: changing a household fuse, repairing a toilet, first aid for a snakebite, and ways to avoid your home being burglarized while on vacation. It is a genuine attempt to clarify and simplify household tasks with which chicks might need a little help.

Luckily, despite the passage of 42 years, toilet insides remain virtually the same today as they were then. If she were so inclined, the average chick could probably get by using the detailed diagrams to fix a ball cock valve and flapper without much difficulty.

However, more recent technological, scientific, and social changes suggest a few changes. Take, for instance, this page on what to keep in a First Aid Kit.

Nothing strikes terror into the heart of a baby boomer like the words “Merthiolate” or “Mercurachrome.” If the publisher is still in business today, it might want to nix the Merthiolate, (banned by the FDA in the late 1990’s for its mercury content.)  Stick Chick suggests replacing this with antiseptic wipes and burn cream.

For the Pièce de résistance,  notice the graphics that accompany tips for burglar-proofing your home.

The universal symbol for a female with broadcast lines and a big “X” over it. 1972 Translation: Women Do Not Broadcast Your Absence.  2013 Translation: Sexist 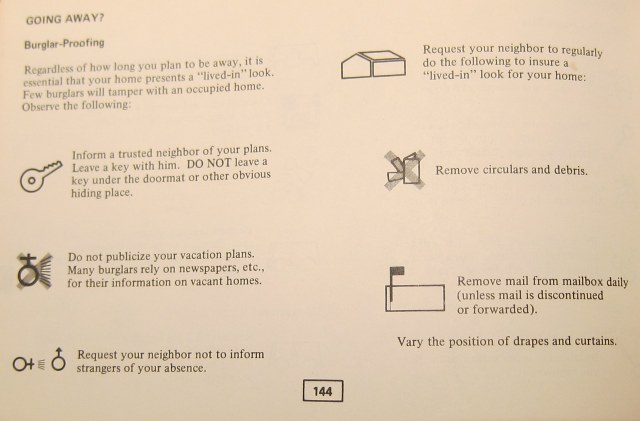 These are the questions that keep Stick Chick awake at night.