Writer and soul singer known for his smooth voice, Isaac Hayes’ 1972 album cover, entitled Black Moses, came rather as a welcome surprise to impress for its creativity.  Musically, the album was winner of a third Grammy for Hayes, for “Best Pop Instrumental Performance,” after his successful “Best Original Score” and “Best Movie Theme” for the movie “Shaft,” just a year before.

But the coup de grâce is the fold-out cover that accompanies it.

With a repeat of Hayes face, you get the feeling there’s a second album inside a second cover.  If that’s what you think, like me, you would be wrong.

The cover opens to reveal a 3 foot by 4 foot, color replica of “Black Moses”  on the one side, and a color photo of the bare-chested Hayes centered above it on the reverse.

Flanked by one tablet on each side, Hayes’ picture sits above a full two-page bio.  The biography by Senior Editor, Chester Higgins of  Jet Magazine, in an old world style font, details Hayes life in a creative storytelling style.

Phrases like, “and so it came to pass that…” give the bio that King James sort of feeling.

Lest you believe that those who heard 70s music for themselves are the only ones who knew Isaac Hayes, in more recent years, he was the voice of “Chef” for Comedy Central’s “South Park,” series until his 2006 departure when the script conflicted with his religious beliefs.

The talented Hayes passed away in 2008, leaving behind great music, a notable voice and luckily some spectacularly creative album cover art. 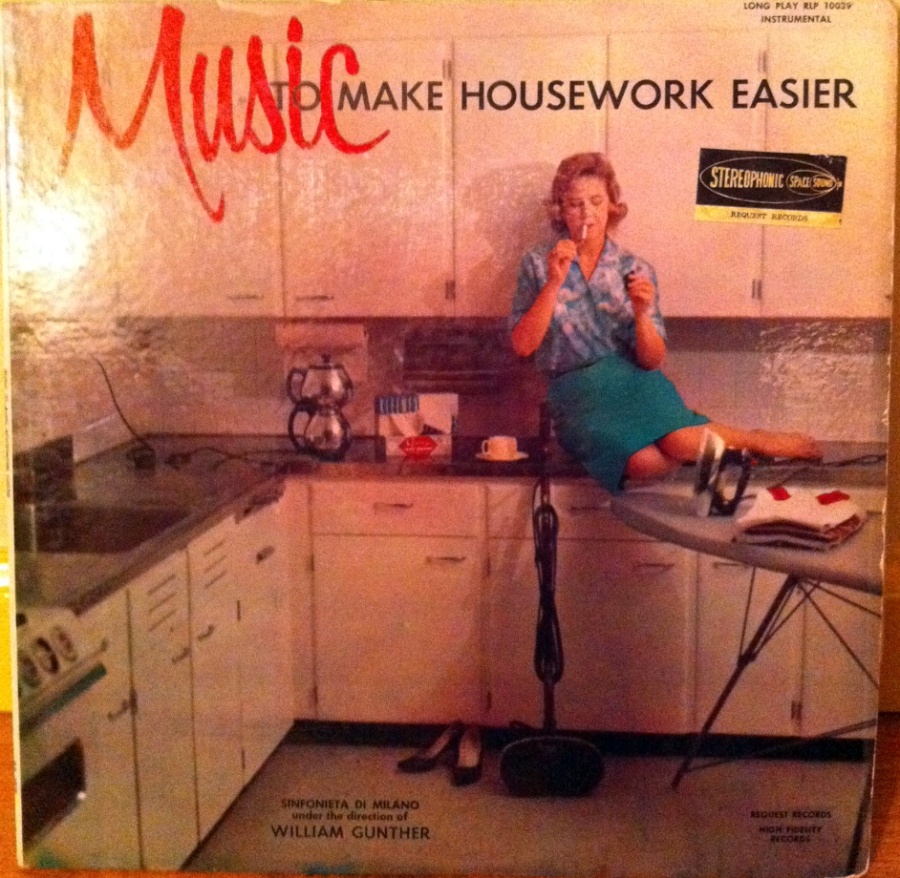 There is one album cover in the archives that deserves a special place in hell or history…I’m not sure which. It might be something to take up with one Norman Goldstein, the photographer responsible for the cover photo, if he’s still kickin’ around. 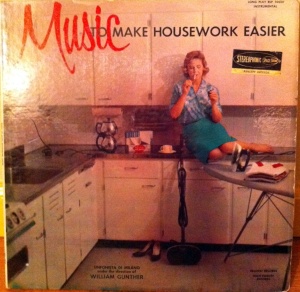 The hair, the lipstick, the cigarette, the skirt, the pantyhose, the heels, the ironing board, floor buffer for the (no doubt) asbestos tile floors, ceramic tile backsplash, stainless countertops, the white cabinets, metal handles, black rubber toe kick, wall-mounted foil dispenser, coffee percolator  and the Kleenex product placement are all too much!

I’m guessing it was pressed in the 60’s based on the address on the back that reads, “449 West 49th Street, New York 19, N.Y.,” and the heavier vinyl used for the record itself.

Entitled “Music to Make Housework Easier,” this instrumental compilation has the following quote (pictured) on the back which renders me speechless.

“Here then, is MUSIC TO MAKE HOUSEWORK EASIER—music for you—to put sparkle into the everyday dust and wash and cook routine—to add color to luncheon—to enhance cocktail hour—and to welcome the evening in all its brilliance.”

Makes you feel like skipping through a meadow…like song number six on Side 2, “Aprons Away.”

Let me be the first to tell you that I accept the fact that I am not the best housekeeper on the planet.  It’s a fault.  BUT when I do housework, I want loud driving rock and roll playing at a decibel that will wake the neighbors.  There’s always a chance they’ll offer to help.

A new year is nearly upon us.  I look forward to digging up 50 albums with interesting cover art.  Here is the first of many to come.