Having neglected album cover art for a while, it’s high time we revisit the topic. Those lamenting the decline of vinyl, or perhaps more aptly, album cover art itself need not fear. While vinyl and CD’s went the way of the bargain bin in exchange for compact hand-held devices that could hold our ever-growing appetite for convenience and quantity, a community of art lovers clung steadfastly to their collections.

Some allowed theirs to collect dust, but could not or did not part with their favorites. Still others, sent them the way of the garage sale or flea market, and for a while it seemed they might disappear altogether as record store chains Sam Goody and Tower Records clung to the capitalistic vines.

For at least the last several years, musicians have experimented with releasing their music in a variety of formats. By creating limited editions, pre-orders, early single releases, and mastering the art of releasing a studio version, a deluxe pack with extra tracks, live versions, digital first, and yes, even vinyl, the new artists have the opportunity for mass appeal.

One such limited vinyl pressing Imaginary Numbers came in the form of a November 2013 acoustic album (accompanied by a YouTube release of a single and a quick bi-coastal tour in the U.S and Toronto) from alternative/punk rock band The Maine. The music on it , while melancholy, is “therapy,” according to lead singer, John O’Callaghan, and kudos are in order for an excellent recording. What makes the plastic unique is what can best be termed as Magic Spin Art vinyl; it is as though someone blew out the candles on the cake that graces the cover, scattering hot wax over all of the icing and placed the whole deal in a centrifuge.

The added insert featuring a black and white photo of the band on one side and lyrics on the other is reminiscent of the expectation of those of us who still consider 50 a figment of our imagination.

Sometimes I miss Freddie Mercury’s voice, but if I listen closely to the echoes of the past, I still hear him crooning:

Rolling Stone pegged Queen’s A Night at the Opera as #231 of the 500 Greatest Albums of All Time. Personally, I would have placed this album higher on the list for its musical originality. However, this is about the album cover. The 1975 single album in pristine condition features a fold-out cover complete with lyrics. And in this case…less is more. 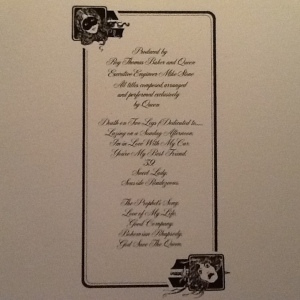 Yup, I can just hear him…

Is this the real life?
Is this just fantasy?
Caught in a landslide,
No escape from reality.
Open your eyes,
Look up to the skies and see,
I’m just a poor boy, I need no sympathy
Because I’m easy come, easy go,
Little high, little low
Any way the wind blows doesn’t really matter to me, to me 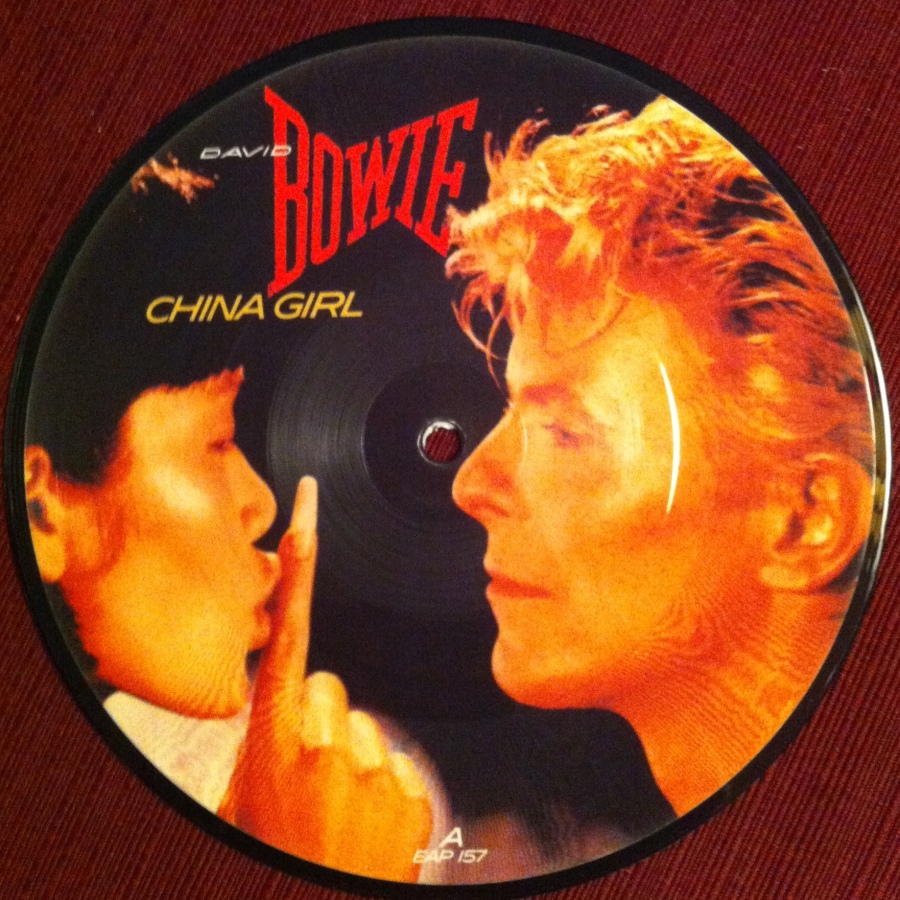 Found: (1) 33RPM Single of David Bowie‘s China Girl import, it’s cover pressed into the vinyl. The size of a 45, this one ranks right up there with some of Stick Chick’s coolest album cover finds. 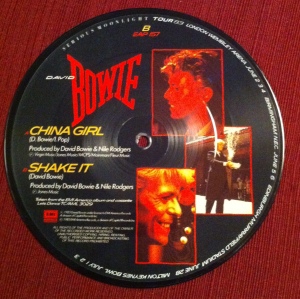 Score one for Astounding Science Fiction magazine. Its editors beat Brit rockers Queen to the punch by snagging American sci-fi artist Frank Kelly Freas’ work for its October 1953 cover. But the Brits took artistic control by hiring Freas this year, nearly a quarter of a century later, to adapt his painting for their new album cover when band mate Roger Taylor noticed it in a shop in Wessex.

In what is no doubt destined to become an iconic rock album cover, the front features a silver-gray robot with eerily human eyes holding the corpses of the band members; the lifeless body of Brian May, recognizable by his dark flowing locks, and Freddie Mercury dangling head-down and bloodied, chest exposed, his hair pulled by gravity. So perfect in its detail, one could imagine Mercury in such a pose for the Royal Ballet. Who knows? With Mercury’s flair for the dramatic in his stage performances, the ballet might not be a far cry.

Hijacked from a science fiction scene, the robot has ripped open a dome, glowing red from within, which is at first invisible until one opens the bi-fold cover to reveal John Deacon and Roger Taylor falling lifelessly through the air, dropped from the robot’s hand. The gaping hole from which the band is plucked exposes the violence, with broken rebar and cracked concrete. Flip to the inside and one finds a brand new painting from the stage point of view. It reveals the terrified close-up faces of fleeing concert-goers as a metallic, blood-stained hand, large enough to hold an adult reaches through the concert hall roof to snag audience members—its eyes looking cold and determined.

Impressive in its creativity, Queen’s News of the World album cover is as original as it is shocking. The complementary reds and greens create dissonance as the green reflects from the robot’s humanoid face accentuating its unnerving nose, lips, chin and ears. Chilling in its effect, one would expect Queen to deliver equally chilling musical performances on this album, but we will leave that to the fans to decide when they hit Philly November 23 and 24 as a part of their current News of the World tour.

Even if you have been living under a rock and missed all of five of Queen’s previous albums, consider yourself challenged to walk into any Hi-Fi House or Tower Records and not be at least intrigued when most of the other album covers you will see feature haute couture photos of the artists as in Fleetwood Mac’s Rumours or Billy Joel’s The Stranger. For the artistic departure alone, this album is a must have; destined to become a classic.