After experiencing blinking cursor syndrome in recent months, Stick Chick decided to gain some new perspective. “Get a hobby!” she thought.

She rummaged the closet locating an unopened counted cross stitch project with an oval frame. So, after completing her first-ever major artistic production, Stick Chick made a determination: 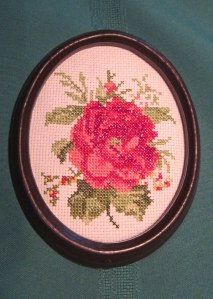 She ventured into town, convinced she should look for ideas. As a child, she had once constructed a model of the lunar module which eventually took a header off the dresser, decisively ending her collection.

Until Stick Chick saw this car parked at the local Wally World, she had completely forgotten about the lunar module, probably a result of brain damage incurred in the process. Convinced she had seen a mirage, she approached for a closer look. “Is it a hallucination?” she wondered.

The fuzzy dice were the first clue that this vehicle required more than a passing glance.

“The effects of model glue must have triggered a flashback,” she thought.

Rubbing her eyes, she took a closer look.

“The only thing more mind-blowing on this jalopy would be a spoiler,” she considered.