Some album covers are not especially artistic. Others are nothing more than a photograph on a 12” x 12” cardboard sleeve. Some are astonishing works of art. But every once in a while, you find one that is a historical document: by accident, design or both.

Benny Goodman in Moscow ©1962 by Park Recording Company, Inc. for RCA, is one such album cover. It documents the first jazz band tour by an American of the then U.S.S.R. from May 30 through July 8, 1962. The written history is now (in my humble opinion) laudable, odd, amusing, sexist, racist, and politically charged.

To read the history is mind-blowing on several levels. One passage is of political interest. “The Union of Soviet Composers—which is the official musical Establishment in the U.S.S.R.—held a reception for Benny. (Here I renewed my acquaintance with composer Aram Khachaturian, without an interpreter—we spoke Armenian.) The mere fact that Mr. Khrushchev attended the opening concert with a panoply of top Soviet officials, and later engaged in an informal discussion with Benny at a Fourth of July party at the American Embassy, served to put the highest stamp of approval on the tour.” 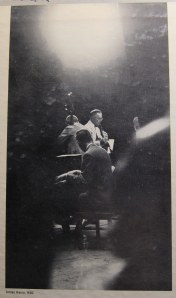 “The tour had played to sold out houses in every city, mostly in large sports arenas, and brought a genuine slice of America to thousands of people who obviously reacted strongly and favorably not just to the music, but to the musicians. And not just because they were musicians, but because they were people. Everyone came back from the trip with the feeling that he had given some pleasure and done some good in relations between the people of our country and of the Soviet Union. And that’s what really counted.”