Today I cut up a watermelon because, (I’m embarrassed to admit) in my house, if you don’t cut it up in easy-to-grab hunks,  it will become one large science experiment that consumes a quarter of the entire interior refrigerator space.  Later, it becomes chow for wild bunnies that cavort in our back yard.  Conversely, if I cut, de-seed it, and place it in an open bowl in the refrigerator, you’d think there had been a smash and grab robbery centered in our kitchen.  Animals!

In years gone by, we had a family tradition that has since been replaced for lack—of all things: watermelon seeds.

Yes, you read that right.

Usually once in the summer, often on the Fourth of July, but occasionally at the family picnic, after a gluttonous afternoon of burgers, dogs and all manner of picnic food, we’d all gather to eat watermelon along the deck rail.  In season watermelon should be sugary-sweet, dripping with juice and full of big brown seeds.

It wasn’t the eating that was paramount at this point.  In fact, chances are, the adults were sun-baked, relaxed, and downright nostalgic.  Then the REAL fun began.

Now there’s some disagreement as to whether winners are judged on accuracy or distance.  Usually the one who drank the most beer is the judge (whose decisions are final.)  Unless he or she changed his or her mind, or was otherwise incapable of making a sound decision.

Furthermore, as kids, we were always told if we ate a watermelon seed, a watermelon would grow inside us and later sprout out of our ears which gave us incentive to join in. 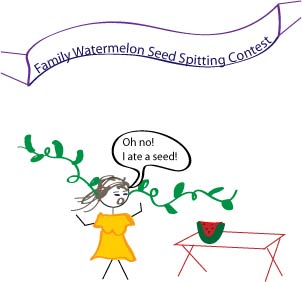 So where are the watermelon seeds now?  I think Monsanto may know something about it, although if I were to bet my bottom dollar they’d either deny it, or say they are giving “us” what we want…seedless watermelons.  I would expect little else from a company that gave the world polystyrene and DDT.

So now, we revert to the only other worthy summer fruit for the endeavor.  Bing cherries!  Cherry seeds go the distance, but accuracy is always questionable.

2 thoughts on “What the Hell Happened to My Watermelon Seeds?”