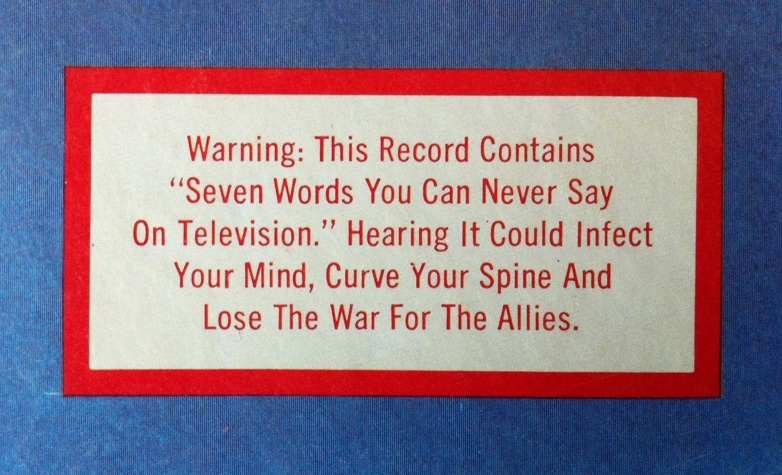 Who doesn’t appreciate the class clown?   These people offer simple respite from otherwise dull classroom lectures, and are generally responsible for more hijinks than they actually get in trouble for.  Class clowns are forever memorialized by a single portrait in the high school yearbook under such titles as “Most Likely to Drive Through a Car Wash in a Convertible” or “Most Likely to Become a Singing Telegram Deliverer.”

Today I came upon an album cover that reminds me of a moment in time, probably in the summer of 1975.  A lover of all things comic, using babysitting money I had saved, I bought this vinyl treasure at Sam Goody’s in the mall.

As soon as I got home, I bolted for our sitting room where there was a record player.  Excited to give it a listen, knowing that all of my friends had been talking about it, I naturally chose the crème de la crème of all tracks.

My mother stormed in—shocked and dare I say furious, having heard “Seven Words You Can Never Say on Television,” blistering loudly from our small, distorted speakers.  She removed it, shrieking all the while, and promptly made me throw it in the trash.

Covertly removing it later from its final resting place under the cover of darkness was out of the question.  Trust me, I just knew this, but the thought did cross my mind.

Considering I was all of 14 years old, with younger sibs, I cannot blame her.  At the time however, I was not at all pleased because I was out the cash and I missed out on all the fun.  An argument ensued which I definitively lost.

I believe that George Carlin’s subsequent longevity as a comedic performer, albeit at times offensive to some, proves that while my choice may not have been in keeping with good taste, I was onto something.

Oh yes, years later I eventually bought Carlin’s album again both for posterity and because it’s album cover is a classic.

The next album purchase choice was Aerosmith’s Dream On, which Mom met with less fury, though not with the enthusiasm I had hoped for at the time.  At least I was allowed to keep it.